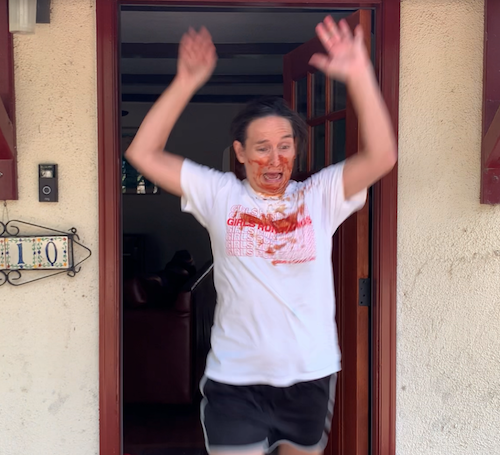 As you know, we LOVE films made on location, and this is one film but MANY personas, all portrayed by Dominique Dibbell! We’ve never seen a person play an entire family before, and hats off to Dom, she (all of her many characters) nailed it! Here are some questions she answered for Gothtober about how she made her film:

Who was the ketchup wrangler?
Johary was ketchup wrangler. We had one shot at this, and I laughed. Oh well.
Also, after shooting, I threw the shirt in the garbage. A few days later when I reviewed the footage, I realized we missed a few shots, so I had to fish the shirt out of the garbage and clean all the ketchup out. I now know how to remove ketchup stains.

Were there any concerned locals watching you run down the street covered in ketchup?
The only people on the street were a neighbor teen and his friends who were working on a car. This is the bad teen who’s had the cops to the house a few times, so he didn’t bat an eye.

Where was this filmed?
Filmed at our house.