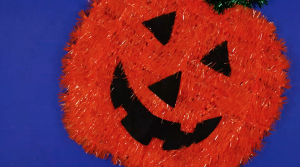 There is a LOT of candy in today’s Gothtober 23rd cinematic jaunt, so much that you may feel your glycemic index go up just a bit watching today’s animated diversification of candy craziness!

Jenny Walsh, fim maker, commercial animator, teacher, and martial arts mama has recruited her sons, Harry and Liam, to help her make the shapes march and twirl across the candy screen! They could not be learning from a better animator, Jenny Walsh’s locomotion skills are to be envied, she knows analysis and locomotion, squash and stretch, the rhythm and blues of making stuff move. Habitually, Jenny Walsh is always Day 23 on the Gothtober calendar, so for past glimpses of her greatness, visit the Gothtober archives and check out all of the twenty-threes.

It is indeed a conspiracy, a plot to inspire trick-or-treating and rabble-rousing of the best kind.

You’ll dig the 8-bit soundtrack, colors and composition of this animated piece. Jenny’s husband, Dave, did the editing and post, so it really is a family affair! 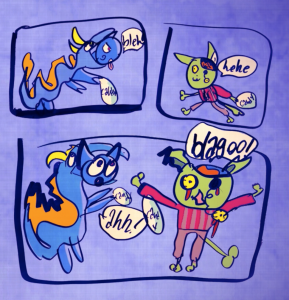 So who is this Shipo, anyway? It’s all very cat-centric, you see.

Watch this great story by 8-year-old Sienna from Little Green Dog! Little Green Dog has been a Gothtober staple for many years, and often, Sienna and her cats were the inspiration for some of the great work put together by Sienna’s parents, who run Little Green Dog. But this year is different, because this family production team, for the first time, features Sienna behind the camera as writer, illustrator and narrator! She also plays some of the piano in this video!

See how the drawings come to life in this adventure about Halloween, and friendship. It’s even better if you’re eating candy while watching the show.

Arriving (or departing?) via Crystal Ship today are The Waller Family Singers! Click Pumpkin 16, and don’t be surprised if your consciousness is raised by 20% after seeing it, there are secrets and symbols we may never understand, but this is how it is when the mysteries of October are revealed. There are many many things to see in this piece, and the voice of “Ghost Dad” as I shall him for the sake of not exposing his identity, is as lovely as ever, but especially haunting for such a friendly spectre! Take a trip into a situation where acorn tea doesn’t need as much water as you thought, rabbits get hugged, pumpkins push strollers, figurines and gems connect with each other, and beards come in florescent colors.
The more I looked at the Ghost Dad, I had a weird feeling he might exist in another realm, a place where he might materialize in this waking physicality. It’s probably just my mind trying to make sense of alternate realities, because I could also swear that I saw his likeness flit by in Gothtober Pumpkin #9… I think managing all of these Gothtober contributors has me going batty. Anyway, we seem to be on kind of a psychedelic path this week, and I like this song, so I just thought I’d share it with you. 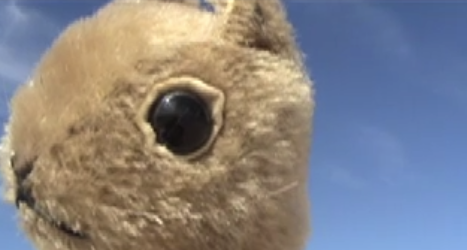 We’re starting your week with an uplifting, mind-altering experience called The Waller Family Singers. The Wallers set out for the desert with the specific purpose of not doing any yoga, but instead to create a film combining the collaborative input of all family members.

Scenes were shot in Joshua Tree and 29 Palms, and you may catch a glimpse of some native chaparral, a ruddy desert landscape at eventide, some scampering gleeful kid jewel thieves, perhaps some toast made of felt, and an emblematic figure whose face is concealed by a gauzy and ornamental headdress.

The desert is a magical place, no one knows this more than The Wallers. Do not seek to understand, simply seek No Yoga.