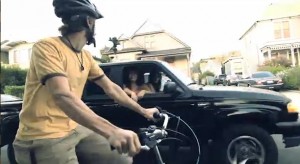 Shot in and around Echo Park, Los Angeles, this is the first Gothtober film to involve demon possession via fast food hamburger. Look closely at the branding in this film, and be careful if you ever see a Chamuco Restaurant when you’re driving around town… maybe keep driving. That’s it, just roll on by, and if you see beautiful women eating Chamuco burgers that tell you you’re “totally nice” and follow you in their truck: RUN.

The film makers were shooed away from various parts of Los Angeles by people insisting they had to have permits. Neighbors were alerted from the blood-curdling screaming performance and came out to the porch with concern, and then amusement. One neighbor let the crew use her kitchen to wash off after a particularly gory scene. This is guerilla filming at its best, get out there and use the nearest cul de sac to make a masterpiece! We think you’ll agree, this was done in spades and then some by Coral Lobera of Listen Lady Productions and Vladimir Santos of Exploding Buffalo.