The Gothtober Countdown Calendar™ it’s like an advent calendar except for HALLOWEEN!

Gothtober is a curated time-release flash-based online museum/installation of 31 works of art by 31 different artists. The official run of the show is from October 1st to the 31st, a new piece by a different contributor is revealed with each day of the month. Every calendar is designed and illustrated by Head Candycorn Julianna (JP) Parr (that’s me) but what’s inside the doors is up to the participant behind it! Here than, without further adieu is our “Gothtober Hall of Fame” containing no less than 400 original works from the last 18 calendars since Gothtober’s inception in 2003. Click on a “museum piece” to visit the archived works from each year.

And then we reached 2021, aka Gothtober NINETEEN. A year after covid, but still quite fraught, we kept making weird internet art. Since we were still kind of cooped up in our homes, we decided to take things on the road. The theme was “TruckStop” and 10-4, good buddy, Gothtober artists delivered! From attack pies, to tiny explosions of brussels sprouts/cabbages and bears driving big rigs, 2021 is one heckuva trip. Hit the Highway…

Our EIGHTEENTH Gothtober calendar was in our first ever year of Covid. This was the EASIEST Gothtober ever managed, because everyone was trapped inside their homes during quarantine. The theme was “QuaranWeen” and so you’ll see some pieces reflecting that topic. Otherwise, anyone is always welcome to make work that is in the general theme of Halloween and all things that go bump in the night.

Our SEVENTEENTH Gothtober calendar had a theme of “GHOSTS” where users dabbled in the afterlife and all things gone beyond. We also had TWO surprise banana pieces completely unrelated to each other… Halloween coincidence or SUPERNATURAL SPELLS? 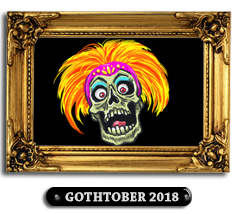 Our SIXTEENTH Gothtober calendar embraced casino culture, quite the gamble! Inside this calendar, you’ll find singing, stop-motion animation, witches, mermaids, disguises… it was a voracious fun-filled variety of ghastly treasures! 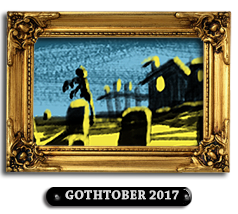 Fifteen marked Gothtober’s Quinceañera, so we gave artists the opportunity to connect with their inner debutante. Some of them did, and some of them didn’t, it’s up to YOU to find out who did what, that fine year. Click on the creepy grave in the frame and behold the pieces from 2017. 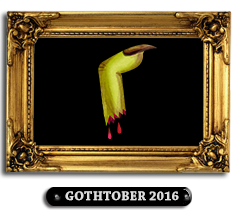 For our fourteenth year we focused on “metamorphosis” the changing, fluctuating and simmering aspects of transformation! Click on the bloody severed finger and be whisked away to the Gothtober artworks of 2016. 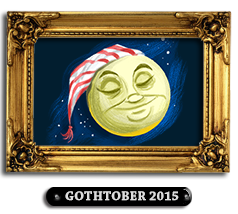 Teenage angst hit us in our 13th Year! We built an entirely new structure for Gothtober, making it functional on phones, tablets, and other devices! It was our first non-Flash site ever!!! That didn’t stop us from giving you stop motion movies, original musical works, drawings and disguises! Click on the moon masterpiece and find all the arty treasures! 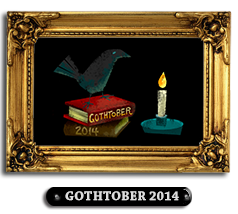 We went literary in 2014, an entire bookshelf of cultivated, lettered works, some of them familiar, some of them yet to be discovered. Gothtober is very well read, we’ve got classics like “War and Pieces” and “Of Lice and Men” but we’re not afraid to read newer, nonfiction titles like “The New Spider Diet” and “101 Brain Recipes.” We believe in self improvement. Settle in for the night with our shelf of tomes, you won’t be disappointed. 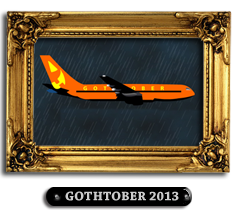 What is more frightening than flying thousands of feet from the ground inside of a tiny pressurized tube? For some, it’s the most white-knuckle version of horror they know, and so we delivered. Gothtober Airlines was so much fun, we may revisit another form of travel one of these days, it’s apparently a very fun theme to work with, according to Gothtober Artists! This was our eleventh, sit down with a tiny bag of airline peanuts and watch the fun! 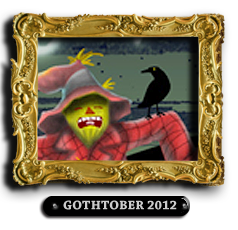 2012 Marked the 10th Anniversary for Gothtober, we just decided to follow the theme of “Halloween” like the first Gothtober Calendar ever made! Visit this calendar and pick from 31 pumpkins waiting in the patch, all of them have different expressions, and different sounds. Matter of fact, see if you can find the Wilhelm Scream! Josh Fielstra composed the Guaraldi-esque tune for 2012, and if I do say so myself, it’s quite “Great Pumpkin” worthy! You’ll see a Halloween Circus, a Flying Canoe, Haunted Postage Stamps, Zombies in Silverlake, Bearded Glittery Witches, The Creepiest Jump Rope EVARRR, and so much more! 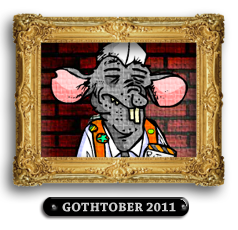 2011’s calendar adopted a “chain restaurant” theme. Gothtober Contributors are invited to participate in the annual theme, or just make something that goes with the general “Halloween” spirit of things. Since fast food and chain restaurants are one of the scariest things in existence, it was a perfect topic to explore. Music once again by Joshua Fielstra, which he was worried about being credited for because I asked him for “the worst canned chain restaurant music you can manage.” You’ll find pieces by celebrated animators Christine Panushka, Trixy Sweetvittles and Billy Kheel. You’ll also find some tasty treats from Cosmo Segurson, Kate Morrison, Barry Morse and Coral Lobera, The Gump Family and Monica Howe. 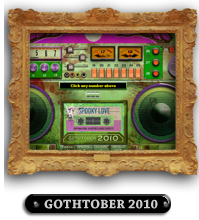 Welcome to the Haunted Boom Box! You can listen to three different fresh soundtracks while you peruse the knobs and levers of this totally tubular supernatural hi-distress sound machine. The songs were all composed by Joshua Fiestra, who went into his secret 80s laboratory full of dry ice and synthesizer crumbs only to emerge and then immerse you completely in a swath of audio ghostly retro bliss. 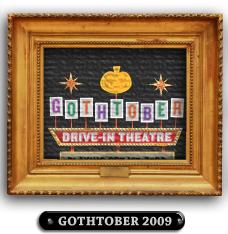 In 2009 we went to the “Drive-In” and you will indeed see some spooky cinematic moments, from recipes, to visits of actual drive-in theaters, to a plethora of strange macabre mini films. The Electones provided the excellent “Off to the Movies” soundtrack of the calendar. 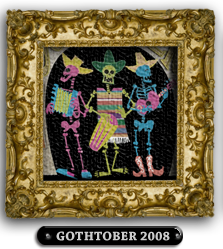 The Latin version of Michael Jackson’s “Thriller” by The Electones (Jason Myers, Mike Bolger and Jason Pipkin) graces the “Sugar Skull” theme we had for 2008. There’s no shortage of crazy and interesting stuff as usual! 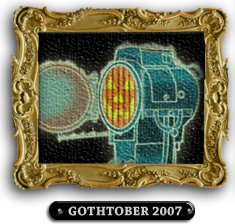 Take a trip on the sunken S.S. Gothtober that went down in a storm many years ago. Step into a creaky rusty overgrown collection of weird tales, strange phenomenon, ghastly gruesome discoveries, Halloween recipes and more. 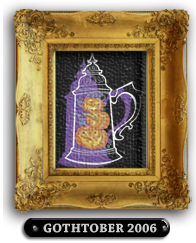 Gothtoberfest, with it’s lederhosen and eyeball-infested steins of beer was quite the rollicking time, complete with craft projects, a bicycle game involving downloadable dice that can be printed and used for an adventures on your two-wheeled steed. 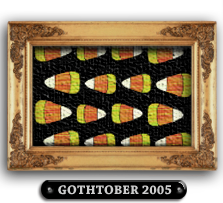 Bubbling frothing insanity from the mad laboratory was in order for 2005, the sounds of the lab were culled and edited together by artist and author, Andrew Choate. 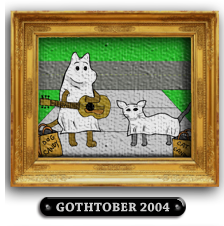 The second Gothtober Calendar EVER is hosted by music from the Electones (Joey K on drums in 2004) the gravestones within contain things like the gruesome fate of a mouse, a gumshoe mystery with dioramas of dolls, and a very moving photo slideshow about Dia de Los Muertos. 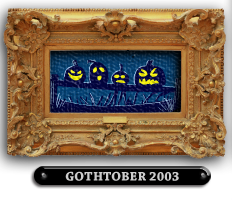 This was the very first Gothtober Calendar ever created! I’d tried a Christmas-themed calendar before this, one with collaborations like Gothtober, and one where all of the content was created by me, inside and out. Based off of the fact that Halloween is such an “Anything Goes” kind of holiday, and the countdown consists of six more days than a countdown to Xmas (which also means 6 more artists to work with) I stuck with the calendar that could be infinitely more weird.

The first 5 years of the calendar were programmed by Bill Luttrell
From 2007 onward our programmer has been Cathy Davies, followed by LauraMann, while Priestess of web and compression for all the calendars is Cristin Pescosolido