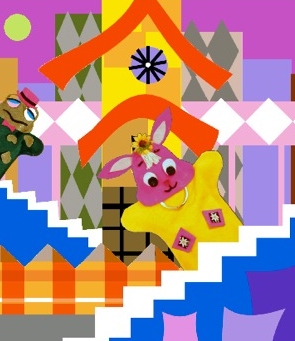 Barry Morse, (not to be confused with the Canadian American Actor who died in 2008) is a master of the beautiful, interesting and grotesque. When Barry Morse told me he was making 17 felt puppets, I took pause and thought “This is going to be 10 trillion tons of awesome.” Well, I was right. Peek into the gumdrop-colorsode of color that Barry has prepared for us, it truly is a wonderland of gorgeous Mary-Blair-esqueness… except kinda gay and crazy and put through the moebius strip kaleidoscope that is… well … BARRY. Not that I’d want to do this, but I’m convinced if we popped open Barry’s brain, we’d find butterflies, muscle men, cookies, rainbows, lots of catchy songs, perhaps some disturbing plastic baby arms and much much more.  Mr. Barry of Hollywood holds a cornucopia of wild visuals between his ears twenty four hours a day, seven days a week. We are lucky that he’s been sharing his visions with us every Gothtober.