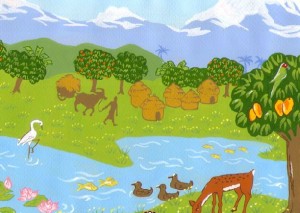 There’s nothing like a red-robed goddess riding on the back of a lion to brighten your day! Told in a mode reminiscent of the Cherial Scrolls used in storytelling traditions of India, Stephanie Abler returns to Gothtober with a beautifully illustrated tale from one of the world’s oldest religions. This six-minute sequence that combines 29 gouache paintings with sound and music tells an ancient story in which a goddess battles a demon in the form of a buffalo.

Watch Durga the goddess get to work with her sword, a trident, a bow and arrow, her rope, and other weapons (she has a lot of arms)! Watch her fight lions, warriors, an elephant and many other demon forms! Get some popcorn and enjoy this captivating whirlwind Hindu story of creation and destruction where the cosmos show that even gods and goddesses spiral through an unending cycle of birth, death or dissolution, and reincarnation.

And if you like Steph’s work as much as we do, check out Stephanie Abler’s blog!